The site is a former semiconductor production facility that operated from 1965 to 2005. Manufacturing processes involved the use of chlorinated solvents, including trichloroethene (TCE) which was later found in site soil and groundwater. SME has provided extensive site investigation, remediation, and monitoring support services at the site which has been successfully redeveloped as a car dealership.

The manufacturing facility covered approximately five acres, with wastewater lagoons adjacent to the building. TCE and other volatile organic compounds were found in groundwater downgradient from the facility. SME worked closely with facility owners and operators to investigate and assess the extent of contaminants in soil and groundwater and potential migration to off-site receptors.

Early investigations focused on the lagoons, which were remediated and closed in the 1990s. The facility closed and went through RCRA closure with SME support in 2005, and the building was removed in 2010. Initial investigations did not locate a source of residual TCE in site soil or groundwater, but concentrations in downgradient groundwater indicated that a source remained present. Further investigation by SME identified TCE concentrations in soils beginning about 20 feet below the former building.

SME conducted a focused Corrective Measures Study to evaluate remedial options for the “hot spot” soils. Excavation and off-site removal was the remedy selected; however, there were technical and engineering challenges associated with removing the impacted soils without generating a large excess of soil that would be expensive to manage or potentially dispose of off-site as hazardous waste.

SME sought to limit the soils handled for off-site disposal to those within the tight boundaries of the hot spot. SME’s remediation design included excavating and stockpiling soils that could be reused on-site, providing access to the hot spot soils, and establishing a sheet pile wall around the 60-by-20-foot area with steel sheets driven below the base of excavations (more than 40 feet below grade).

The enclosure was kept filled with water to maintain outward pressure on the sheet piles.  Soils were removed and stockpiled in a lined area constructed in such a way that water saturation could drain back into the excavation. Once excavated soils were sufficiently dry, they were containerized and disposed of  off-site under hazardous waste manifest. Activities were confined to an area that did not impact site development.

Following successful completion of hot spot remediation to the satisfaction of the regulatory agency, SME continues to perform water quality monitoring at the site, focused on downgradient conditions and limiting impact to the client’s budget and to the car dealership’s operations. 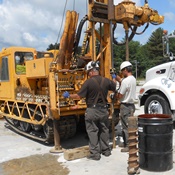 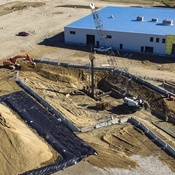 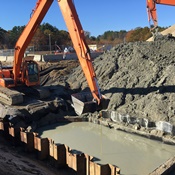 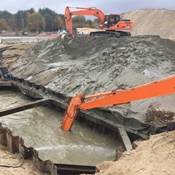